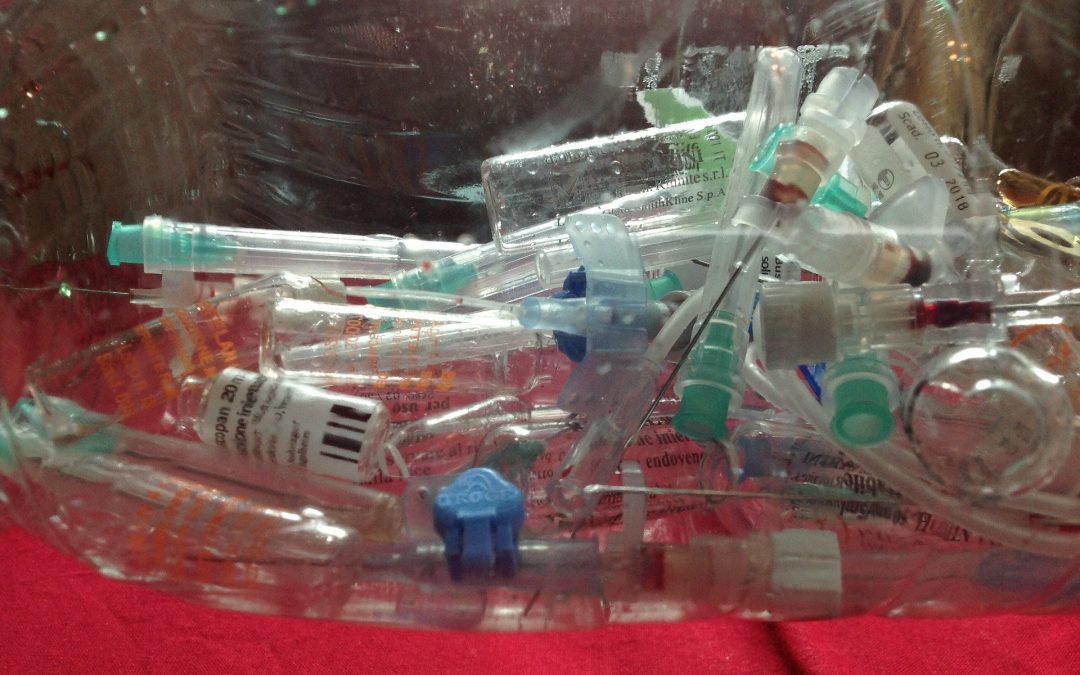 A worker sorting materials at a recycling facility feels a needle pierce their protective glove. Once again used syringes were tossed into a recycling bin by a confused or unaware resident. The recycling line is shut down while the worker is assisted and co-workers hunt for other needles. The worker heads off to a testing lab and waits anxiously for several days to learn if they were infected by that needle stick.

A senior who injects insulin at home several times each day to manage diabetes struggles with the additional cost of buying sharps waste containers and the inconvenience of finding local drop-off locations.

A local health department has to dig into their spread-too-thin budget to provide safe needle pick-up kits to residents who want to clean-up needles in a local playground to protect their kids. Many more needles are picked up every month by the city parks department and local law enforcement.

These are common examples of the hazards and challenges of getting rid of used medical sharps in our country. Home-generated sharps are often improperly thrown away in the household garbage, or in recycling bins, or even flushed down toilets. With the explosion of the opioid epidemic, discarded needles in public bathrooms, bus stops, and parks have become a big problem and expense for municipalities trying to protect the public, especially children, from harmful and painful needle stick injuries.

There are some sharps collection boxes and drop-off locations in Washington State, mostly funded by local governments and their taxpayers. Because of insufficient funding, 21 of 39 counties do not have any type of sharps drop-off site. In those jurisdictions, residents are given the unsatisfactory advice of putting sharps in a plastic container and throwing this biomedical waste in the household trash. Some pharmacies sell sharps containers and take-back containers purchased at their store, however such end-of-life disposal fees are often a barrier to residents doing the right thing.

Producer responsibility policies are an effective strategy to overcome the key barrier to solving the sharps problem: sustainable financing. Manufacturers can work the relatively small cost of sharps take-back into their business models. Efforts to enact sharps stewardship legislation were launched in Washington in late 2019. WA House Bill 2360 was introduced by Representative Strom Peterson in the 2020 session and advanced through the House Health Care & Wellness Committee.

As part of a consulting project for Zero Waste Washington, Community Environmental Health Strategies developed the bill’s policy and played a lead role in refining the legislative language and conducting stakeholder outreach. The policy development was informed by analysis of sharps stewardship programs operated by the pharmaceutical industry under laws in 4 California counties, many Canadian provinces, and some European countries. California’s experiences have been especially informative. In 2018, California became the second state to pass a comprehensive producer responsibility law for drug take-back, after Washington’s ground-breaking 2018 law, and the first in the nation to require that manufacturers also provide a sharps mail-back program. Rule-making for the California stewardship law is ongoing and on a longer implementation track than Washington’s process where a statewide drug take-back program must launch in late November 2020.

There is a great deal of overlap between programs and policies for drug take-back and sharps take-back. There also are differences in the federal and state regulatory contexts, collection system requirements, the types of appropriate disposal facilities for public health and environmental protection, and the manufacturers marketing the products. For these reasons, proposing separate policies can be beneficial to achieving programs that are well-tailored to meet consumer needs. Washington’s proposed legislation expands on the California law’s concept with a comprehensive and flexible system of sharps drop-off locations, mail-back, and support for programs operated through public agency infrastructure. Distribution of proper sharps waste containers and public education by manufacturers is also required.

It has been exciting to be a leader in bringing producer responsibility for leftover medicines to Washington State, as well as contributing to passage of Oregon’s Safe Drug Disposal law. Pharmaceutical industry financing and operation of secure drug take-back programs has improved consumer access and convenience while also relieving financial burdens on local governments. Opportunities for more effective public messaging about safe medicine use and disposal are enhanced by the existence of a robust take-back system. The same outcomes can be true for sharps.

During many years of stewardship policy work, “but what do we do about sharps?” has been a common question from community members, local government leaders, and a range of health and environmental stakeholders. It’s great to now be able to respond that policy work is underway in Washington State to solve this sticky dilemma.

While staying in due to wildfire smoke and COVID-19 precautions, I’m catching up on updating my blog on my consulting activities. More work on sharps stewardship is anticipated in 2021. Organizations and agencies that want to join this effort can contact Zero Waste Washington.